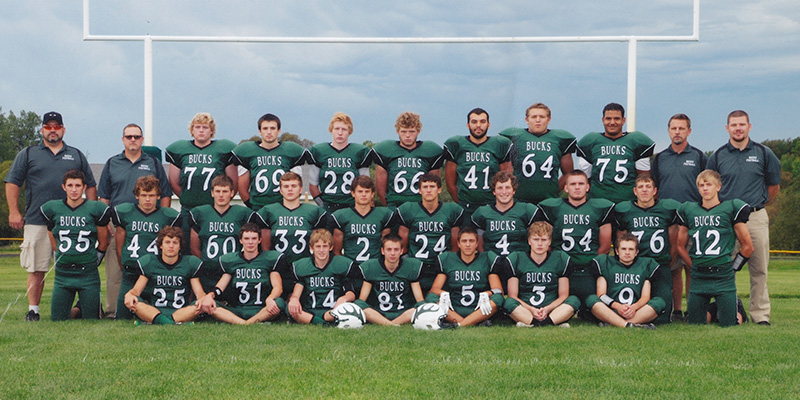 Season Recap:
The 2014 season was one to remember. The Bucks appeared in the playoffs for the first time since 2005, won their first playoff game in school history, and went on to win a district title the following week. The Bucks set the tone from the opening kickoff of the season when senior Brandon Fulks returned Kalkaska’s kickoff for a touchdown. Fulks not only broke the Blazers, the Bucks won 39-6, he broke records for scoring in a season and a career, as well as the career receiving touchdowns and rushing touchdowns. The Bucks trounced Benzie Central the following week by the score of 55-13. The Bucks lost their first game in week 3 against regional champions Beal City and then lost again by 5 points in week 4 against a very strong Wyoming Godwin Heights team. The Bucks got back on the right track by beating Lake City 42-6 and then by returning the Armed Forces trophy to Pine River by beating Evart 16-6 on homecoming. The Bucks limped in to Manton and lost by 3 points to a talented Ranger team. The following week gave the team some extra time to heal up because Marion forfeited due to not having enough players. That set up a crucial game 9 match up against McBain. If the Buck won, they would be guaranteed a playoff spot. If McBain won, they might be able to sneak into the playoofs with a 5-4 record. The Bucks came out a bit flat and the Ramblers took an 18-7 lead with ten minutes to go in the third. A Brandon Fulks touchdown put the Bucks within striking distance. Then senior Mitchell McDonald took over. McDonaldl made two interceptions and also had a strip. That allowed the Bucks to score three more touchdowns and chalk up a 35-18 victory! The 6-3 Bucks earned a trip to Tawas City for a playoff match up with the 7-2 Braves. The game was back and forth and for a moment it look like Tawas had the upper hand having scored a touchdown late to make it 19-19. However, Brandon Fulks returned the ensuing kick-off for touchdown. The Bucks held on for 25-19 win. That win sent the Bucks on the road to Sanford Meridian for a rematch from Pine River’s 2005 playoff game. The Bucks and the Mustangs battled back and forth, and with a little more than a minute left in the game, the Mustangs scored to tie the game 19-19. This time the hero wouldn’t be Fulks. It would be sophomore QB Mason Powell. Powell, who trailed only Fulks in rushing for the season, made a huge play with his arm. Powell threw a perfect strike to senior Greg Park for the go ahead score and a district title. The Bucks run would end the following week against an 11-0 Boyne City team. The Bucks were down 5 in Rambler territory late in the game, but this time they were unable to get that late score. On the season, Pine River scored 341 points, and averaged 31 points a game, second only to the undefeated 1999 squad. While the offense was the talk of the town, the improved defense was an important component of the Bucks success. All-state defensive lineman Jeff Gross was a force on the line, and Junior Dominic Garcia racked up 109 tackles from his linebacking spot.