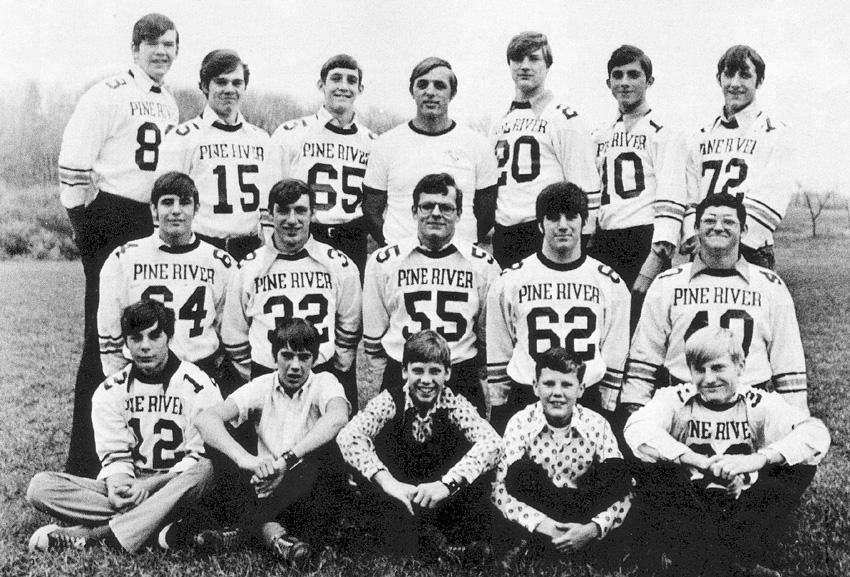 Tough is probably the best word to describe the 1973 season. The Bucks only managed one official win, that being by forfeit over Baldwin in the last game scheduled that year. The Buck’s new coach Dan Helminski was also described as tough, and 9 returning players quit rather than be subjected to his grueling workouts. Even Coach Helminski said that “we pushed them a little harder that we thought we would.” The only returning starter who stuck with it was guard Jerry Nelson. The Buck’s own toughness showed up after the second game as the defense became stingy and refused to let their opponents cross the goal line with any regularity. In fact, the defense did not let up more than 16 points in the last 4 games, however they always came up 8 points or fewer from victory. In the 3rd week of the season the Bucks faced off with Manton. The Bucks were tied 8-8 with Manton thanks to a Kevin Wanstead TD run and a safety. However, the Rangers completed a 9 yard TD pass for the winning score with just 8 seconds left on the clock. The Bucks played Beal City the next week and lost another tough one by the score of 6-14. Kevin Wanstead again scored the Bucks lone touchdown after a scoreless first half. With 3 1/2 minutes to go and the Bucks down by 8, the area lost power and the game was called. The following weekend was homecoming and the Bucks dropped another close contest to Marion, who would end up conference champions. Dave Johnson threw a 17 yard screen pass to Bill Hall for the Bucks only touchdown. However, Juan Berretta, an exchange student from Uruguay, kicked a 22 yard field goal, the first ever PR history. It wasn’t enough though as the Bucks lost 9 to 14.The Bucks were left with only 10 healthy bodies for the following week’s game versus Lake City, so they had to forfeit. However, Lake City scheduled another game so it didn’t officially go down as a loss. The Bucks used the week off to heal up for one last game versus McBain. As luck would have it, the Bucks lost to McBain by a score of 6-12 and finished the season with a 1-6 record.