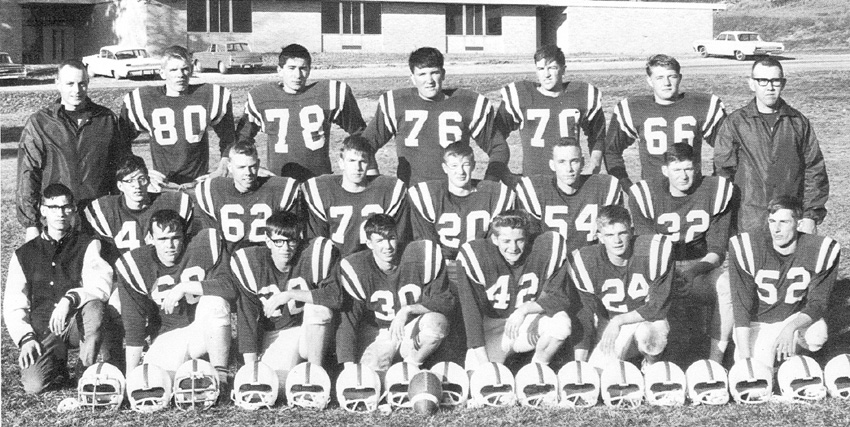 Season Recap:
Pine River High School came into existence in 1965 when LeRoy, Tustin, and Luther High Schools consolidated into one high school. The next year, 1966, the school fielded its first football team. George Showers served his only year as head coach that fall. The team featured 18 players without any experience in the game of football. Coach Showers told the Cadillac News “Actually we had to start right from the start and say, ‘Here’s a football’.” Not only were they lacking experience, the Bucks didn’t even have a stadium (a new high school was still being built) and they played their “home games” on the road. The Bucks were forced to practice in the outfield of the baseball field. Evidently the game was also new to the spectators in the community as one adult fan approached Coach Showers after a game and told him how much he enjoyed the game, it had been the first one he had ever seen. Low numbers, inexperience, and several injuries made the first season a trying one. The first Pine River football game featured the battle of the Bucks, Pine River lost to Roscommon on the road by the score of 50-0. The Bucks also got shut out the next four games and their opponents rolled up over 180 points. Pine River’s first score came in the next to last game when Pine River scored its first touchdown on the road against the eventual undefeated league champion Marion Eagles. The score came on a 40 or 50 yard (accounts vary) pass from Bob Swanson to Ron Kanouse. However the Bucks suffered their most embarrassing loss as the Eagles won by a score of 93-6. Coach Showers called the score “uncalled for.” To add injury to insult, literally, QB Bob Swanson broke his leg in the contest. Despite the setback, the Bucks did put up another score in the final contest of the year when reserve QB Terry Anderson scored on a run off tackle against Manistee Catholic Central. The run was set up with a 30 yard pass from Anderson to Mike Long and a 15 yard pass to Ron Kanouse. Despite a tough year, and an 0-7 record, Pine River Football was born that fall. Coach Showers told the Cadillac News that “our community has been behind us all the way. It takes this to help build a team. We’ve had a lot of support, and a lot of spectators at our ball-games.”